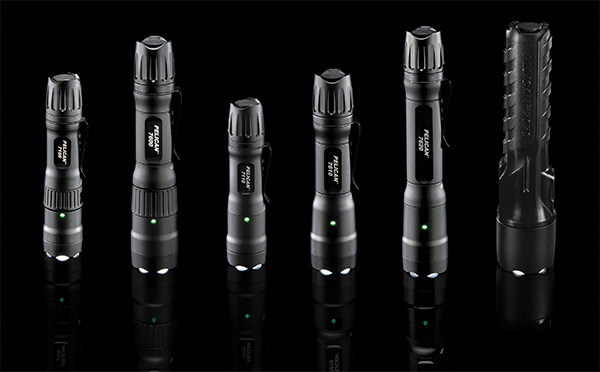 “The Pelican 7 Series tactical flashlight line has been developed with law enforcement in mind,” said Stephan Corti, President of Pelican Products Commercial / Government Division. “The launch of the Pelican 7100 and Pelican 7600 lights provided our most versatile duty and tactical flashlight to the market, and these latest four additions to the line combine their best features along with exciting new technology. We know a flashlight is a key component of an officer’s arsenal, and our R&D team spent time with users to develop a line of intelligent lights that provide the light they need in any situation.”

One of the distinct features of the all-new Pelican 7110, 7610 and 7620 tactical flashlights is the ability to reload multiple battery choices including AA, CR123 and rechargeable, giving officers flexibility and never leaving them without light when it’s needed most. In the same style as their predecessors, the lights are manufactured with an extremely robust aluminum body and type III hard anodized finish, making them tough and versatile.

The game-changing Pelican 7070R tactical flashlight features exciting, industry-first Bluetooth® wireless technology, allowing the user to personalize the modes (up to 5 switch sequences with varied light levels and/or flashing modes) through the intuitive app (Android and iOS). This, combined with wireless USB charging, makes it the most advanced Pelican flashlight ever.