How to Photograph Lightning

Are you trying to capture lightning in a bottle via camera and lens? It’s not an easy task! It takes commitment and patience above all, and it can also be dangerous if you don’t know what you’re doing. But do it right, and you’ll reap the rewards of an awe-inspiring, jaw-dropping shot. Ready to lasso a lightning bolt? Learn how to photograph lightning so you can capture the light show in all its glory.

Is It Safe to Photograph Lightning?

Photographing lightning is completely safe, so long as you use some common sense and be mindful of your surroundings. As a general rule, if you can see the lightning, it’s close enough to strike you, so avoid open areas and stay inside a house or a car to ensure it can protect you. You also want to make sure you are at least 50 feet away from water sources and tall objects like trees. With this in mind, you can photograph lightning.

The best camera to photograph lightning is a DSLR or a mirrorless style, complete with manual controls that allow you to adjust the shutter speed, aperture and ISO. It’s also a wise idea to find a camera with a RAW file option rather than just JPEG.

Traveling to a nighttime destination with showers in the forecast? Make sure to pack everything in a camera hard case that is waterproof and can protect your gear from the elements.

Even if you have a surgeon’s steady hand, a tripod is a must. After all, this is lightning we’re talking about. A few seconds and it’s gone, so make sure you come prepared with a tripod to steady your camera while it’s on a shutter speed.

While most lenses will work, aim for a zoom lens over a prime lens, which will allow you to photograph lightning at various distances. Wide-angle lenses can also allow you to capture a dramatic scene over a landscape or with large cloud structures. Plus, they eliminate the guessing game of where the bolts will sprawl out and strike next. While it’s not impossible to capture lightning without these lenses, it requires a bit of luck.

Speaking of luck, these accessories can work in your favor:

Cable release – Bring a cable release with an infrared remote so you can take a shot without touching or shaking your camera.

Flashlight – Bring a high-powered flashlight to illuminate the foreground of your shot for a dramatic image (and to find your way around, of course).

Lens Cloth – With lightning follows rain, so be prepared to keep your lens dry should you begin to get a sprinkle. Even a single drop could ruin a perfectly good photo. You could carry two, placing another over the camera itself.

Camera Trigger – Seek out a specialized camera trigger that is designed to send a signal to your camera at the exact moment a bolt breaches a cloud. Plus, a trigger also offers a level of safety. 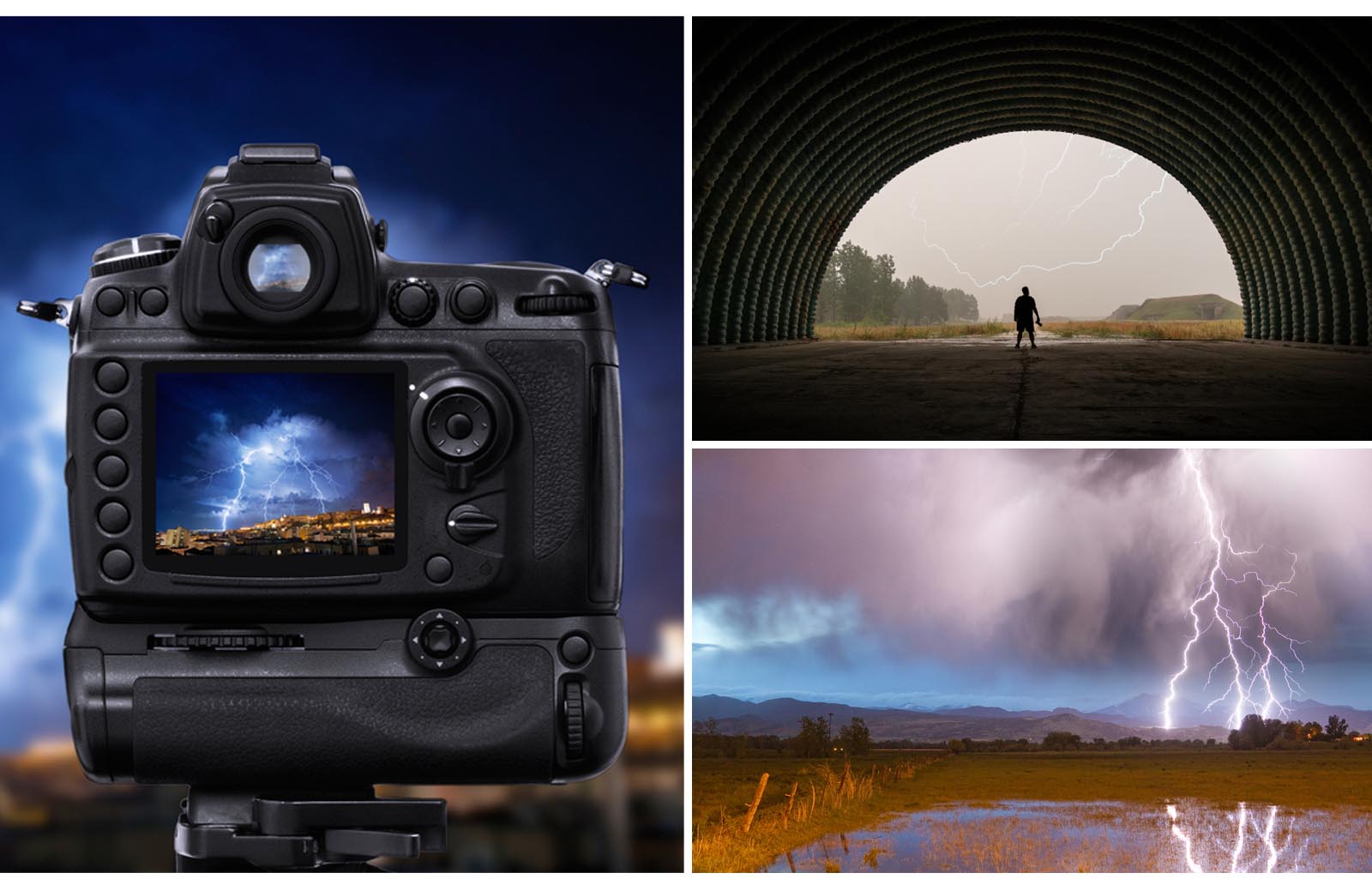 Where do you find your subject matter? MIOPS, known for their camera triggers, suggests the top five lightning strike map apps so you can literally chase the lightning. Using these apps, find a location that provides a more scenic foreground. While you can take a shot from your backyard, it won’t be near as majestic as a foreground with cactus or a reflective lake.

Also, be sure to plan ahead of time, searching for a few good (and safe) spots. Ideally, your location will offer an expansive sky and an interesting foreground, even if it’s only silhouettes and shadows.

Even if the perfect location means traveling halfway around the world for a stellar shot worthy of a photography award, don’t hesitate! Just make sure to pack everything in a carry-on travel case for the camera and other gear.

Now that you know a proper location and have become a novice storm tracker, give yourself time to get there and set up your camera settings. What kinds of settings should you use? While it will always take some tweaking, here’s a good starting point:

The Focus – Set the lens to a manual focus on the distant horizon, taking a shot or two to ensure it comes in sharp on the LCD. As a rule of thumb, make sure you’re set to a base ISO (between 64 to 200) and try to use your shutter speed and aperture to brighten the photo

Camera to Manual Mode – Like the lens focus, set your camera to manual mode. Otherwise, you might get an incorrect exposure.

Shutter Speed – Set your camera to a longer five- to 30-second shutter speed to capture lightning, especially if you aim to photograph multiple bolts across the landscape. However, this might brighten your foreground. So if you want a silhouette instead, aim for a shorter shutter speed of one to three seconds.

Lens Aperture – For long-range shots without a foreground, set your aperture to f/5.6. However, if the aperture is too wide and your image appears overexposed, bring the lens down to f/8 or smaller. If it’s so bright that it calls for an f/16 aperture, switch to an ND filter to minimize light.

Now that you have your must-have equipment and camera setup, it’s time to compose your shot. Essentially, whenever you photograph lightning, you want to follow the rule of thirds and capture more sky than anything else because that’s where your subject matter will eventually light up.

Compose the shot wider than usual to capture the lightning. You can always crop it later. Just make sure there’s nothing in the foreground that will cut off a beautiful bolt and spoil your photo. If you plan to adjust your photos in editing software, make sure to keep your laptop secure in a laptop protective case.

Be Patient and Experiment with Your Shots

Above all, be patient and experiment until you get it right. You’re trying to capture lightning in a bottle, which will take time.

Branch Out: How to Find Success in Nature Photography
Photography | June 16, 2020

Just a Phase: How to Photograph the Moon
Photography | January 10, 2021