A week-long hunting trip is a lot different than a day-long excursion. Instead of a convenient walk-in cooler or ice chest back at home a few hours away, you’ll need to contend with butchered meat from the moment you take down the animal to prevent it from spoiling.

In this guide, Pelican offers some tips on how to keep meat cool when hunting. In addition, we explore how soon after the shot you need to get the meat cool and how to tell if your meat is already gone and unsafe to eat.

Spoiled meat is caused by bacteria, which can grow in certain ideal conditions. Temperature, for example, can cause bacteria to grow quite rapidly. The USDA states that bacteria can double once temperatures reach above 40 degrees Fahrenheit. So unless you are hunting in winter, you need to recover your kill and keep your meat from spoiling as soon as possible.

Otherwise, if the deer or game is left unattended, it can begin to spawn bacteria from its organs, spoiling the meat and going to waste. How long do you have after you make the shot? Don’t let the game lay there for more than half an hour before field-dressing and removing the organs and getting the quartered meat on ice.

How to Keep Meat Cool When Hunting

Learning how to properly gut and field dress animals is an important step in preserving meat. If you aim well and strike the neck, lungs, heart or liver, it will bleed the animal out, removing an extra step. However, you must still remove the organs, including the heart and lungs, which requires breaking the sternum — and quickly! Once you finish field dressing the deer or whatever you shoot, you can also throw some ice in the newly-made cavity and throw it in a hunting cooler.

If you’re hunting big game like deer or elk, we suggest using a rolling cooler with wheels to carry it back to your truck or vehicle once it’s loaded up and heavy.

Dry the Meat and Cool It Slowly (If Necessary)

After taking apart the game, keep the quarters dry as possible, cooling them slowly over time in the shade. Then, place the quarters on a clear tarp or clean plastic trash bags somewhere shaded, like beneath a tree, and give them time to air dry.

When hunting in the colder months, all you need is a few hours to dry them. However, it’s the warmer months you need to worry about. For the warmer seasons, you want to be sure to keep the meat cool. This is where a cooler comes in handy. Instead of leaving the meat out to dry, place it in a high-quality hard cooler that can keep it fresh for several days.

Extra Tip: While you might want to keep that perfectly white cooler interior as clean as possible, never place meat in a garbage bag. The airflow is not adequate and the meat will actually sweat, making a pretty awful odor instead. It’s easier to clean a cooler of blood than to try to remove a smell. 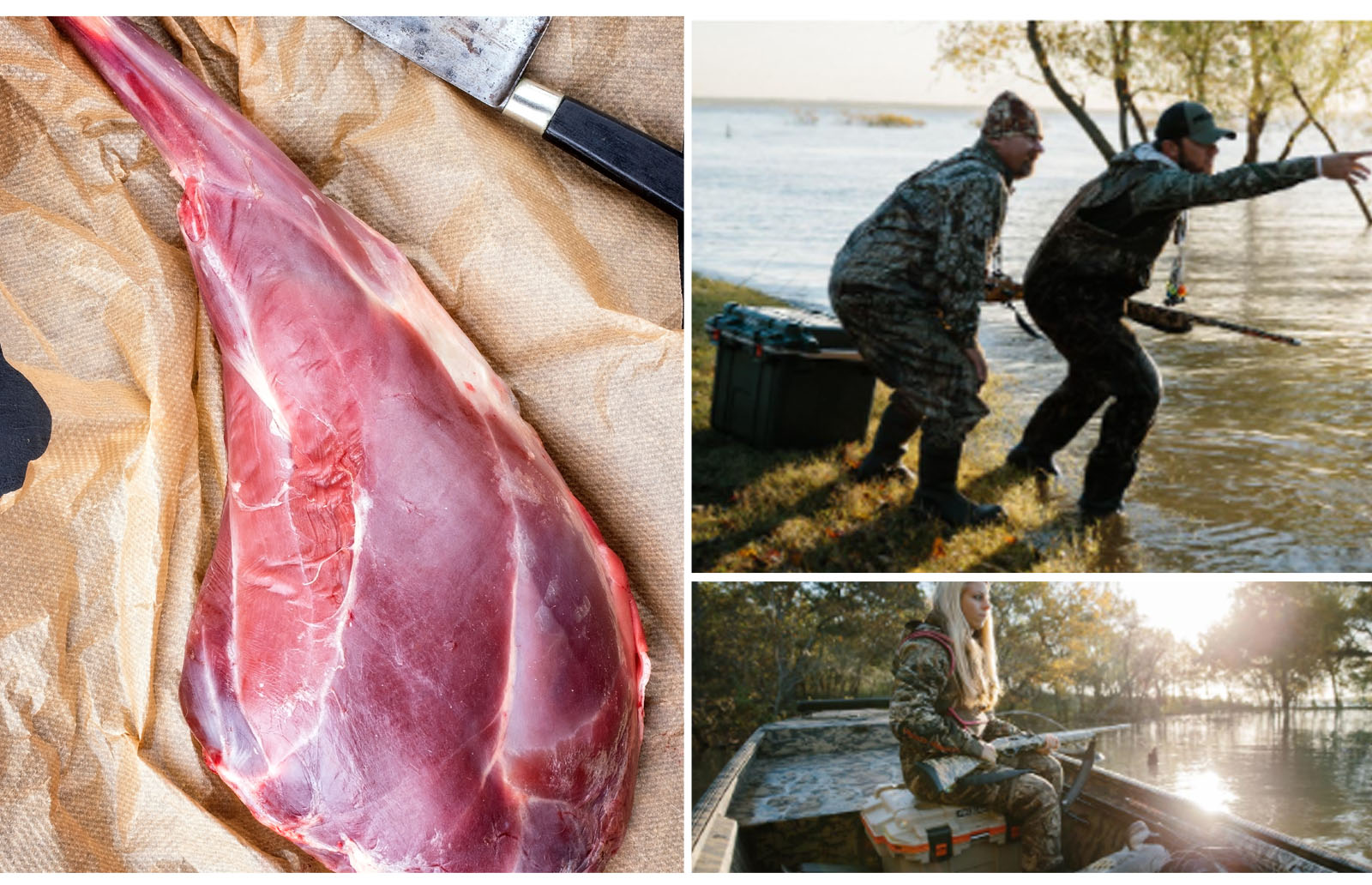 Be sure to keep the meat cool above ice — not below! Placing meat beneath the ice will only make it waterlogged. While getting meat soggy isn’t going to spoil it in any way, it will instead give you a hard time once you go to cutting it and storing it in a vacuum seal for later consumption.

Not only should you bring along a sealed and watertight cooler to keep your meat cool when hunting, but it should be airtight, too. Don’t make the mistake of leaving the drain plug open, as this can offer an opening for flies, which can infest the meat and turn into something worse like maggots. Some hunters consider tilting the cooler up and opening the plug to drain the remaining bloody water, which is okay for a little while and in cooler weather, but don’t push it or attempt in warm temps. Remember to cap the drain plug and seal back the cooler before too long.

Smell the Meat and Check Its Color

In the field, you need to think like a USDA inspector, checking the meat’s color and giving it a whiff. Understanding what a rich red color means vs. a tan hue can save you from a nasty bout of food poisoning. If you just shot the deer the night before and only found it the following morning, take caution. It can turn quicker than you think, especially if it’s been feeding other local wildlife like coyotes overnight. Even if it looks good now, be sure to smell the meat and check the color once you arrive home, too.

Keep Your Meat From Going Bad

If you plan to go hunting for extended weekends and plan to carry back meat, you need to know how to keep it cool. Since bacteria infests primarily through the organs, you also need to understand how to field-quarter the animal on the spot, remove the organs, cut away the meat and put it on ice pronto!